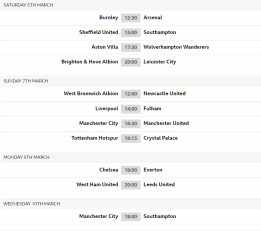 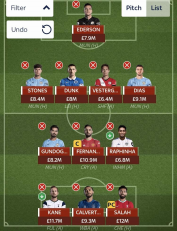 I have two options for captain on Saturday, Lewis Dunk and Jannick Vestergaard. Ideally it would have been Harvey Barnes but we all know what happened there. Think Vestergaard just has the edge for me, feel like he is due a goal after coming painstakingly close in every game since overhaul. Somehow Pickford and his little arms kept him out, the sky reporter actually gave Pickford man of the match for that. In all seriousness I think Vestergaard has a chance for a goal, clean sheet and passing bonus. Knowing my luck he re-injures his knee after 3 minutes.

Lewis Dunk is just gonna sit in my team until the Newcastle captaincy, feel like Leicester could score and dominate possession giving Dunk only 2 points, I just can’t bring myself to captain him. He is always a goal threat and you never know might get passing bonus if Leicester decide to sit back play on the counter. I’m ok with still having him in my team on that basis but I can’t captain him.

A number of options today with my players from Liverpool, Man City, Man United and Spurs all playing. Not gonna go for Bruno or Salah, United are struggling to score against the big teams and Man City have the best defence in the league. Salah could do well against Fulham but Fulham have tightened it up and I actually think Salah has a chance of being rested with Jota coming back into the picture, unlikely though.

For me it’s a Man City defender or Harry Kane. Man City are unlikely to concede against United so Dias has a good chance for 20 pointer as captain, which is basically the norm for him now. Harry Kane has Palace who are currently one of the weakest teams in the division and he is overdue a big haul. Right now the captaincy is on Kane.I feel Man United will go at Man City and try to score, the fans are kicking off about not attacking in the big games and I think Ole and the players will respond. If Man United don’t win this game, I think the league is pretty much won, more motivation for them to go for it.

Two options for captain today in Calvert-Lewin and Raphinha. Chelsea look the real deal in my view under Tuchel. They’ve beaten Atletico Madrid away and kept Man United quiet. With Thiago Silva potentially back I can see a Chelsea clean sheet here.

On the other hand Raphinha has West Ham and by the looks of it Leeds may still be without Kalvin Phillips. Rice and Soucek could walk all over Leeds without Kalvin Phillips. Raphinha has the talent and ability to produce a piece of magic in any game, he’s also on free kicks and as we’ve seen he’s not bad at those either. As with any game Leeds will go at West Ham and try and score. Raphinha over Calvert-Lewin for me.

As we see the line-ups for the Man City v Southampton game I can be flexible about my captain. If Stones plays I will probably captain him over Dias. Ultimately they will make similar passes and score the same amount of points for a clean sheet. But I think Stones is a slightly bigger goal threat and he’s lower owned (63% for Stones in Top 1k and 95% for Dias) meaning a small rank rise for me if Stones outscores Dias.

Other City players playing for me are Ederson and Gundogan. When I can see the lineup I will always captain a defender over a goalkeeper so that rules Ederson out. Gundogan seems to have dropped off slightly but is still making similar movements in the attacking third so he could return, just doesnt have the bonus safety net of the defenders which puts me off giving him the armband.

I’m worried about Vestergaard in this game, but considering I have 4 Man City players any points I lose from big Jannick will be made up by my City quartet. I’ll be happy if he gets 0 or above!

I can only see this game going one way, Man City will win this game. Southampton have too many injuries to compete and with Romeu in particular out Man City could run all over them in midfield. I’d be surprised if Southampton scored too, Danny Ings seems to have gone quiet so I can only see a goal coming from a set piece.

One more player to watch 👀:

No I can’t pronounce his name either, but I heard he prefers Tosin anyway. Fulham look pretty tidy at the back now and he’s a real steal at 5.2m. He’s even managed to get passing tier in a few games. Only issue is that Fulham have a reasonably tough run in but to be honest at 5.2m I’d take 2 points per game! If you’re scraping the barrel for budget he’s your man. Fifa 21 also tells me he’s 6 foot 5, wouldn’t be surprised to see him knock a couple in from a set piece before the season is out.