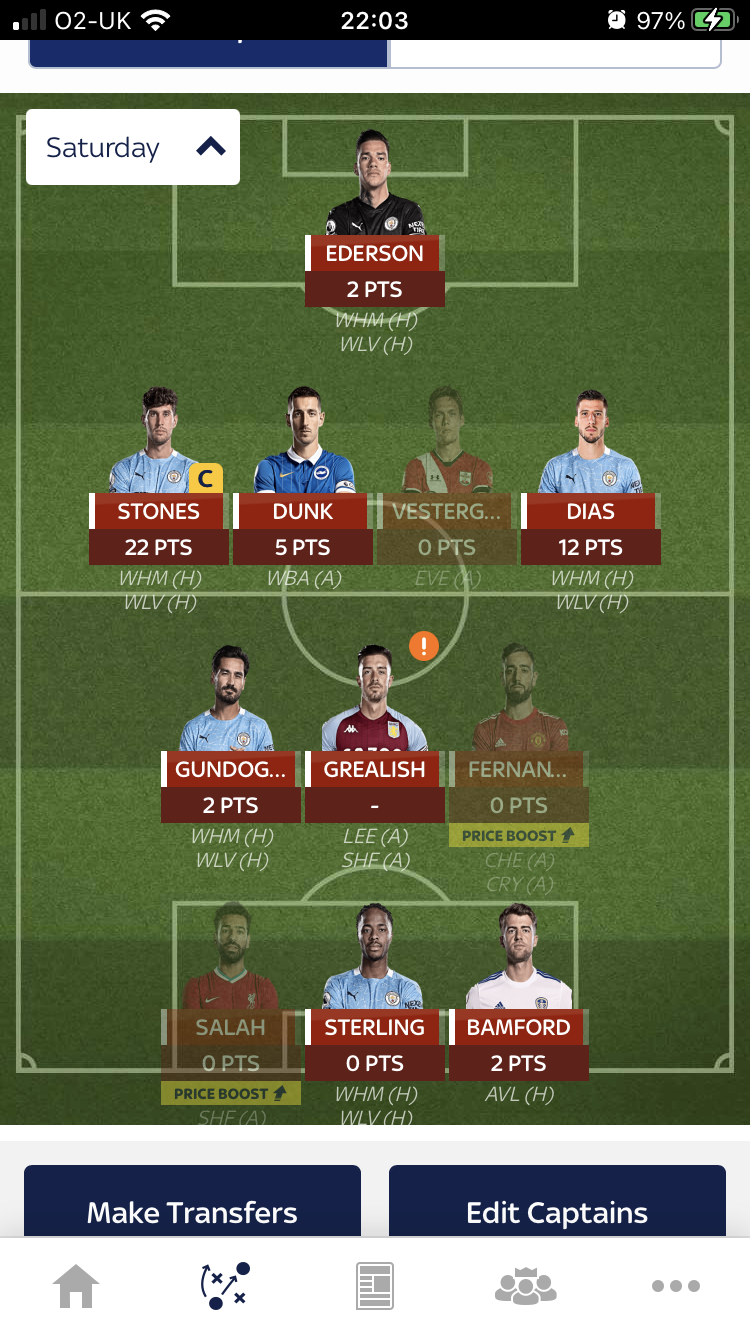 The general consensus was to captain a City defender and as an owner of both Stones and Dias I thought I would opt for the slightly less popular Stones. At 61% ownership in the Top 1k against Dias’ 90% it was clear to see that if Stones outscored Dias I would climb the ranks. It’s safe to say that after the first half however I was deep in the gutter, Dias had scored a goal, the clean sheet was gone and my decision to captain John Stones was looking like a big mistake. Thankfully the second half was a much better story with John Stones grabbing a goal of his own and picking up Tier 1 passes. I was walking around some gardens with my mum at the time and thoroughly embarrassed myself celebrating when I saw on twitter that he had scored, the people around looked at me in disgust as I ruined the peace and quiet of their Saturday afternoon, if only they knew. Stones didn’t quite pick up the same scores as Dias missing out on the Tier 2 passes and the man of the match award that Dias managed. But he did outscore Cancelo whom I know a number of the Top 1k will have instead.

My other Man City assets Sterling, Ederson and Gundogan did absolutely nothing, but given their ownership I’m not too bothered. I will have to keep an eye on Gundogan if he carries on in the deeper role, he won’t be picking up many points from that position.

The less said about Lewis Dunk the better, Lee Mason ruled out his perfectly good goal and left me with just 5 points. I’m glad I didn’t watch that game, and it’s really going to be a test of my patience to leave big Lewis in my team until the Newcastle game. However looking back on his scores over the last 8 games he hasn’t had a single blank, fingers crossed he can at least continue this while he’s in my team.

Will be glad to see the back of Paddy B though, without Kalvin Phillips’ bite in midfield Leeds just aren’t the same. He might come back for the single game day but for now after 1 goal in his last 4. It’s time to go! (I just read that back in Claude from AFTV’s voice) 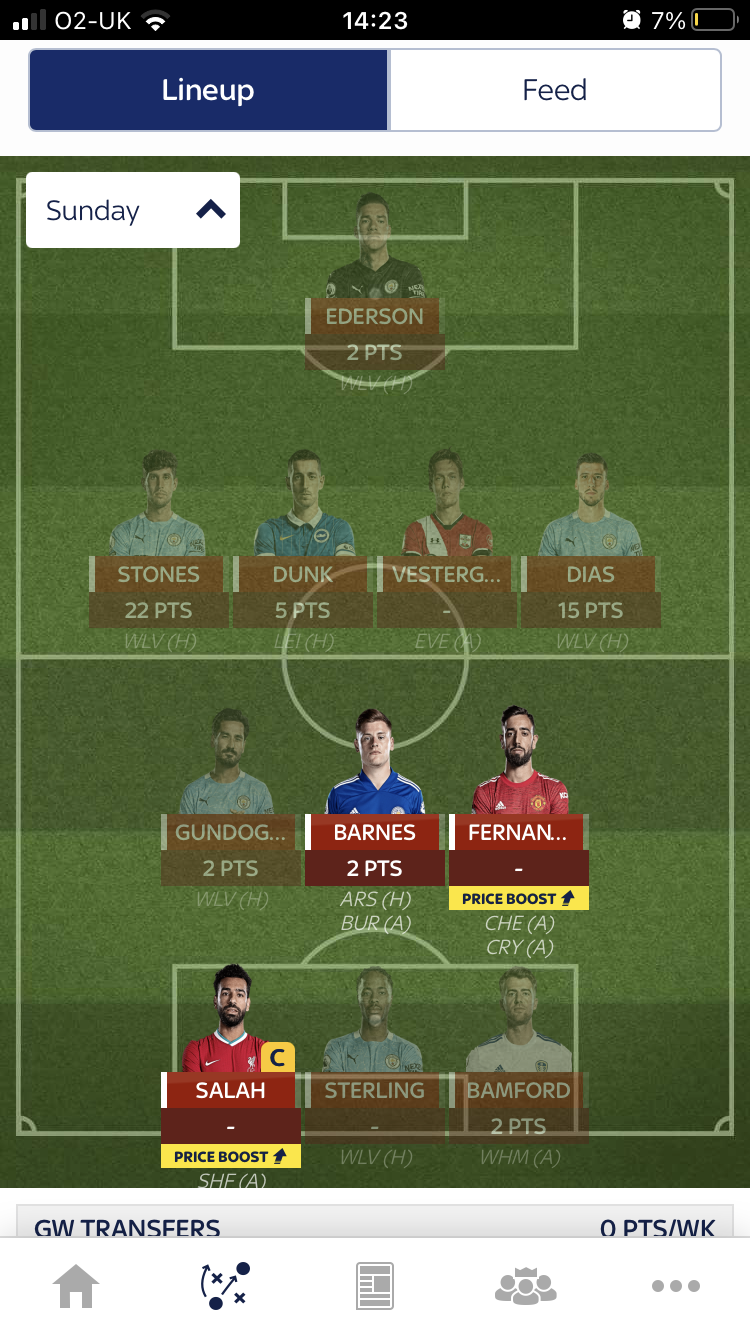 Well what can I say. The gods of fantasy football took a massive dump on my Top 100 aspirations today. Brought in Harvey Barnes for an injured Grealish only for him to pick up a bad injury of his own! Real shame for Harvey, was having his breakout season and to pick up a knee injury at this stage must be heartbreaking for him. Hoping he can get back out there as soon as possible. I’m left with a decision to make as to who I replace him with, at the time of writing this I’m thinking Raphinha or Saka.

I’ve gone against the crowd who are bringing in Harry Kane today and stuck with Sterling to allow me to bring in Calvert-Lewin tomorrow. I am hoping that leaving Sterling and Ederson for another game will make up for my lack of Harry Kane today. He scored fairly early on so I decided to turn the TV off and go for a walk, when I came back the game was over and he still had only one goal to his name. I’ll take that. With a bit of luck Sterling will match his points midweek and I will be even.

I went for Mo Salah as my captain today, against a makeshift Sheffield United defence it seemed like a no-brainer. Considering I don’t have Kane either he was my standout option. First half was a frustrating affair with Aaron Ramsdale turning into prime Buffon. Salah wasn’t really in the game during the second half and he also missed an open goal. Not my day.

Bruno is always a captain shout too but Chelsea look revitalised under Tuchel and Man United can’t seem to score against the top teams this season so Bruno was not my personal pick. It was a decent game but neither team could break the deadlock and Bruno finished on 2 points. He should have had a penalty today though, don’t know how the ref didn’t give that handball.

Not exactly an under the radar player but he appears to have lost the love of the Sky FF faithful this season. Arsenal have the best run-in of any team which makes it hard to look past the club captain.

At the time of writing this he has scored 5 goals in his last 3 starts in all competitions and looks back to his best. Presently only 3 people in the Top 1k have him, I believe he could reward those brave enough to bring him in. With that level of ownership you can expect a steep rise following a haul.

Jesse Lingard has started his time at West Ham playing some of the best football of his career. With 5 goal involvements (3 goals, 2 assists), and 3 Sky MOTM awards in his first 5 games for West Ham he looks a real option. Great value at 7.2m, and solid hamstrings to boot. For that reason I feel he is a better option than Antonio.

At the time of writing this only 6 players in the Top 1k have picked him. He will miss the game against Man Utd because of the loan rule but I will certainly be considering him after that point. He’s a player for the big occasion so I wouldn’t even worry about the fixtures he has (they are actually pretty decent too!).